What Lives In The Woods by Lindsay Currie 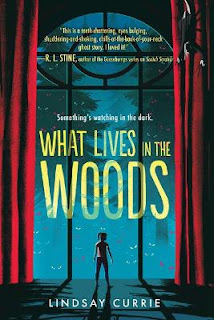 What Lives In The Woods by Lindsay Currie

All Ginny Anderson wants from her summer is to sleep in, attend a mystery writing workshop, and spend time with her best friend. But when Ginny's father--a respected restoration expert in Chicago--surprises the family with a month-long trip to Michigan, everything changes. They aren't staying in a hotel like most families would. No, they're staying in a mansion. A twenty-six room, century-old building surrounded by dense forest. Woodmoor Manor.

But unfortunately, the mansion has more problems than a little peeling wallpaper. Locals claim the surrounding woods are inhabited by mutated creatures with glowing eyes. And some say campers routinely disappear in the woods, never to be seen again.

As terrifying as it sounds, Ginny can't shake the feeling that there's something darker . . . another story she hasn't been told. When the creaky floors and shadowy corners of the mansion seem to take on a life of their own, Ginny uncovers the wildest mystery of all: There's more than one legend roaming Saugatuck, Michigan, and they definitely aren't after campers.

The one genre I always find difficult to source, for primary aged readers is horror.  Something scary (but not too scary), and a proper ghost story, not the old Scooby Doo and Nancy Drew versions where it turns out the 'ghost' was the butler/groundskeeper/janitor pretending to be a ghost.

This is a ghost story, and it's creepy, but it's a real mystery too.  The way the characters work together to follow the clues and solve the mystery , makes it a double whammy, as mystery readers will like this one too.

Great writing really sets sets the scene for this book, and creates the ominous atmosphere that runs through the entire story.

Looking forward to getting this one out into schools and libraries.