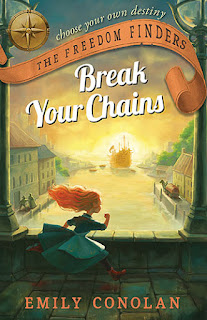 To find freedom, you must leave behind everything you've ever known. It is 1825. You and Ma have survived on the streets of London ever since the soldiers took Da away and you fled Ireland. Now, with Ma gone too, you find yourself facing life-and-death choices at every turn. Can you carry a secret treasure across the ocean and finally be reunited with Da? You'll be asked to betray your friends, survive storms at sea and attacks by bushrangers, and trust thieves. At every turn, the choice is yours. How far will you go for freedom?

WARNING: YOU MAY DIE WHILE READING THIS BOOK... could there be a better opening page

Well, there might very well be, but this one is a cracker, here's what else is on the opening page:

When you read this book, you are the main character, and you make the choices that direct the story.
At the end of many chapters, you will face life-and-death decisions.  Turn to the page directed by your choice, and keep reading.
Some of these decisions may not work out well for you.  But there is a happy ending somewhere.
In the Freedom Finders series, it is your quest to find freedom through the choices you make.  If you reach a dead end, turn back to the last choice you made, and find a way through
NEVER GIVE UP.  GOOD LUCK.

This is quite different from most Choose Your Own books we see.  It's quite substantial in size, at 279 pages, and because thebooks in this series are based on real time periods in history, there is a Fact File section at the back of the book if you want more information.

I did die in this book, more than once, even though I thought I was making the right choice.  I found some of the choices a real battle between head and heart, and they are the type of choices we make every day.  For example at the start of the book, after your Ma has died, you have a choice of giving the stretcher-bearer your bracelet (the only thing of value you own) for a decent burial, OR you keep the bracelet, knowing your Ma would be dumped into the cold earth, without a marker or a prayer. I thought I was doing the right thing by choosing a decent burial for my Mum....

It's an interesting series because I don't necessarily think it will appeal to avid readers of  'choose your own' type books.  It may however be a good opportunity to move those readers onto a new genre of historical or factual fiction, while still satisfying their need for a 'choose your own' book.  It's also something fun for avid readers of historical/realistic fiction, to try something different.

Posted by Rebecca at 5:30 PM No comments: 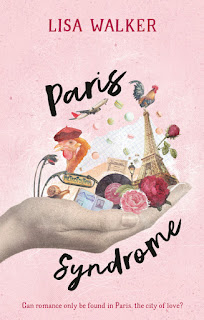 For fans of John Green, this funny and poignant coming-of-age story is about that crazy thing called love. And how it can be found anywhere.

Happiness (Happy) Glass has been a loner since moving to Brisbane and yet still dreams about living in Paris with her best friend Rosie after they finish Year Twelve. But Rosie hasn't been terribly reliable lately.

When Happy wins a French essay competition, her social life starts looking up. She meets the eccentric Professor Tanaka and her girl-gardener Alex who recruit Happy in their fight against Paris Syndrome - an ailment that afflicts some visitors to Paris. Their quest for a cure gives Happy an excellent excuse to pursue a good-looking French tourism intern, also called Alex. To save confusion she names the boy Alex One and the girl Alex Two.

As Happy pursues her love of all things French, Alex Two introduces Happy to her xylophone-playing chickens whose languishing Facebook page Happy sponsors.

Who knew that Paris Syndrome was an actual 'thing'?  For someone who thinks they know everything (me), I am always surprised when I learn something new...which to be fair, is pretty much every day.  Here's what Wikipedia had to say:

Paris syndrome (French: Syndrome de Paris, Japanese: パリ症候群, Pari shōkōgun) is a transient mental disorder exhibited by some individuals when visiting or going on vacation to Paris, as a result of extreme shock derived from their discovery that Paris is not what they had expected it to be. The syndrome is characterized by a number of psychiatric symptoms such as acute delusional states, hallucinations, feelings of persecution (perceptions of being a victim of prejudice, aggression, or hostility from others), derealization, depersonalization, anxiety, and also psychosomatic manifestations such as dizziness, tachycardia, sweating, and others, such as vomiting.[1] Similar syndromes include Jerusalem syndrome and Stendhal syndrome. The condition is commonly viewed as a severe form of culture shock. It is particularly noted among Japanese travellers

I found this book equal parts funny and touching.  It had a light-hearted touch, while still dealing with more serious themes.  Happy is dealing with moving to a new city, being away from her friends, and the place where all of her fondest memories were made.  Her relationship with her father is tenuous, as he now has a new life with his new girlfriend, so she's working on that as well as trying to get her Mum out into the world of dating.

Then there's the question of Happy's sexuality.  She meets two Alex's, a boy and a girl.  She embarks on a relationship with Alex the boy, and a friendship with Alex the girl, only to realise that it's Alex the girl she's interested in romantically.   I thought that this aspect of the story was done so well, as it showed that we fall for a person, not a gender.  It actually comes as a real surprise to Happy that she has these feelings for Alex the girl.

There's also a bombshell towards the end of the novel, where we learn exactly how much Happy is really coping with.

Posted by Rebecca at 2:25 PM No comments: