Owen and the Soldier by Lisa Thompson 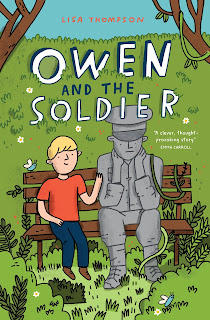 Owen and the Soldier by Lisa Thompson

Owen and his mum are struggling. It's just the two of them now and they're finding it difficult to ask for the help they need.

When Owen discovers a battered old war memorial in the local park, he finds great comfort in confessing his worries to the war-weary stone soldier.

No matter what Owen says, the soldier just sits and listens, and most days that's all Owen needs. So when the council make plans to modernise the park and get rid of the soldier, Owen is devastated and decides to put up a fight.

If he can just show everyone how important the soldier is, maybe this time Owen won't be left to cope on his own.

A Barrington Stoke title by an amazing talent in the genre that I like to think of as ‘emotional fiction for boys’. Not the most eloquent way to put it, but what I mean is, Lisa Thompson writes emotion filled, real life stories, that appeal to boys.  I know there shouldn’t be a difference between books for girls and books for boys, but there seems to be. There are lots of books with a female main character that deal with feelings/emotion, family issues, friendship issues, but not so many with boys... this is where Lisa Thompson comes in.

Owen is a quiet kid, who is bright, but hates being the centre of attention, and speaking in front of groups, even a small class group.  He keeps to himself, his days split between school and looking after his Mum.  His Mum rarely gets out of bed, shops or cooks, so Owen is looking after her.  The one place he feels comfortable to speak, and talk about what’s going on in his life, is in the park, where he sits and talks to a statue of a soldier.

When Owen learns the park is going to be redeveloped and the statue will be removed, he knows it’s time he has to be brave and use his voice, and tell people how important the statue is to him, and why.  It’s the why that explains what’s going on with his Mum, and the poem he reads is guaranteed to bring a tear to your eye.

This book is not a difficult read, and it’s only 104 pages, small but perfect.   Being a Barrington Stoke title means it’s also a perfect choice for dyslexic and reluctant readers.

Posted by Rebecca at 4:44 PM No comments: