From the Mixed-Up Files of Mrs. Basil E. Frankweiler by E.L Konisberg 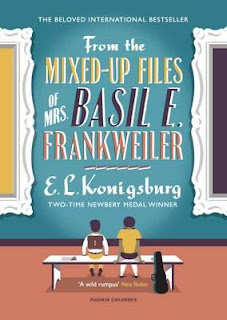 
New York City girl Claudia, a mere month shy of being a twelve-year-old, has resolved to run away from home with her younger brother, Jamie. She knows that she could never pull off the classic spur-of-the-moment departure without a destination (inevitably involving having to eat outside with the insects, and cupcakes melting in the sun); so she plans everything to perfection, including their destination: the grand, elegant, beautiful, all-encompassing Metropolitan Museum of Art...However, no sooner have Claudia and Jamie settled into their new home, than they are caught up in the mystery of an angel statue bought by the museum for the bargain price of $225. Is it in fact an as yet undiscovered work by Michelangelo, worth millions? Claudia is determined to find out, and her quest leads her to the remarkable, secretive Mrs. Frankweiler, who sold the statue to the museum - and to some equally remarkable discoveries about herself...Since its first appearance nearly 50 years ago, The Mixed Up Files of Mrs. Basil E. Frankweiler has gained a place in the hearts of generations of readers - and has rightly become one of the most celebrated and beloved children's books of all time...

So I don't really have to say much about this book except that it's been re-issued this year, 48 years after it was first published.  Most librarians will already know this book, and have had the pleasure to introduce it to many young library goers over the years, so now is your chance to get your hands on a nice new copy, to put in the hands of the new generation of readers. 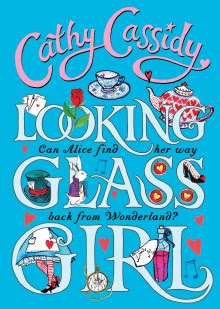 'It happened so quickly . . . I was falling, falling, falling into the darkness.'
Alice nearly didn't go to the sleepover.  Why would Savvy, queen of the school, invite someone like her?
Now Alice is lying unconscious in a hospital bed.
Lost in a wonderland of dreams and half-formed memories, she's surrounded by voices – the doctor, her worried friends and Luke, whose kisses the night of the fall took her by surprise . . .
When the accident happened, her world vanished – can Alice ever find her way back?
A wonderful modern-day reimagining of Lewis Carroll's timeless classic.


2015 is the year of Alice, 150 years since the publication of Alice’s Adventures in Wonderland, so it’s not surprising that we are seeing some Alice spinoffs  out there.

Cathy Cassidy is an extremely popular author for young teenage girls, and her re-imagining of Alice’s Adventures in Wonderland has everything you would expect from a Cathy Cassidy, friendship, bullying, growing up, boys and family.