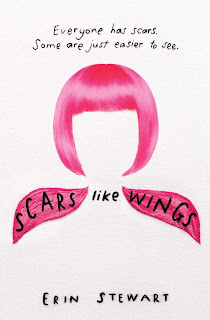 
Everyone has scars. Some are just easier to see ... 16-year-old Ava Gardener is heading back to school one year after a house fire left her severely disfigured. She's used to the names, the stares, the discomfort, but there's one name she hates most of all: Survivor.

What do you call someone who didn't mean to survive? Who sometimes wishes she hadn't? When she meets a fellow survivor named Piper at therapy, Ava begins to feel like she's not facing the nightmare alone. Piper helps Ava reclaim the pieces of Ava Before the Fire, a normal girl who kissed boys and sang on stage. But Piper is fighting her own battle for survival, and when Ava almost loses her best friend, she must decide if the new normal she's chasing has more to do with the girl in the glass-or the people by her side.

The beautiful, life-affirming debut from Erin Stewart that's being called the YA answer to Wonder. Perfect for fans of Jandy Nelson, Nicola Yoon and John Green.

When a book is described as the 'YA answer to Wonder'...you just have to read it and see for yourself.

Life is hard enough for any 16 year old in high school, so imagine if you had to deal with all of the normal high school drama,  while being severely disfigured due to burns sustained from a house fire.  That's only the start of it.  The house fire that was the cause of the burns also took the lives of Ava's parents and her cousin.  So now Ava lives with her Aunt and Uncle...in the room of her now dead cousin.

Like Wonder, this book makes you think about the kind of person you are.  We all like to think that we are good and kind people, but what would it be like when a new girl comes to school, with a melted face, no ear and a toe where her thumb should be?  Would you find it easy to look her in the eye and have a conversation? How would you feel about holding her hand?  Those of who have not been in that circumstance can't answer that, not really...but we all hope we would be able to see past the outside to the person underneath the scars.

Unlike Wonder I found myself putting myself in Ava's shoes.  I don't remember wondering what it would be like for Auggie?  Maybe because he was younger?  Maybe because he, for the most part, had such a positive outlook on life.   But I did wonder how I would feel if I was Ava, maybe because I have been a 16 year old girl.  Would I be brave enough to face the world looking so different?  Would I be able to look people in the eye when they spoke to me, knowing what they see when they look at my face?  Again, we can never know, but I would like to think that I could be even half as brave as Ava.

I know it's only a story, and Ava is not a real person, but reading a book like this makes me want to be a braver person, just in everyday life. Take more risks, do the things you love without worrying what other people will think of you, and find the people that bring out the best in you.

Posted by Rebecca at 3:25 PM No comments:

Email ThisBlogThis!Share to TwitterShare to FacebookShare to Pinterest
Labels: YA

Greta and the Giants: Inspired by Greta Thunberg's stand to save the world by Zoe Tucker illustrated by Zoe Persico 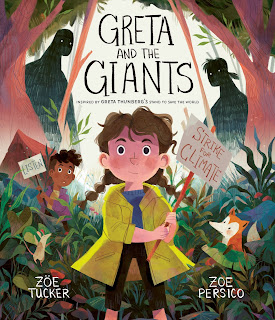 Greta and the Giants: Inspired by Greta Thunberg's stand to save the world by Zoe Tucker illustrated by Zoe Persico

Blurb:
This inspiring picture book retells the story of Nobel Peace Prize nominee Greta Thunberg - the Swedish teenager who has led a global movement to raise awareness about the world's climate crisis - using allegory to make this important topic accessible to young children.
Greta is a little girl who lives in a beautiful forest threatened by Giants. When the Giants first came to the forest, they chopped down trees to make houses. Then they chopped down more trees and made even bigger homes. The houses grew into towns and the towns grew into cities, until now there is hardly any forest left. Greta knows she has to help the animals who live in the forest, but how? Luckily, Greta has an idea... A section at the back explains that, in reality, the fight against the 'giants' isn't over and explains how you can help Greta in her fight.

When I started reading this I was surprised, as I expected it to be a picture book depicting the life of Greta Thunberg.  I have read a number of books about Greta recently for middle grade and older readers, so I thought a picture book would be a great addition to this collection.

That is not what this picture book is though.  As the blurb states (which I obviously didn't read properly), this is an allegory (a story, poem, or picture that can be interpreted to reveal a hidden meaning, typically a moral or political one.).  Once I got my head around the fact that this wasn't a narrative non fiction title about Greta, I was most impressed.  It's the perfect starting point to talk about this amazing young activist with young readers.

Greta and the Giants is a story about a girl standing up to the giants that come into her forest and start chopping down the trees, and destroying the habitats of all who live there.  This is a young children's picture book, and as such it has a positive and happy ending...not necessary a reflection on what is happening in the real world, but for this age group, a satisfying conclusion.  It emphasises the importance of speaking up, and how one voice can become many.

There are notes in the back of the book about the real life Greta, as well as notes on what we can do to help battle climate change.

~ Thanks to NetGalley for the reading copy 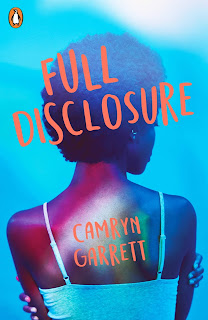 
Simone is HIV-positive - and positive HIV won't define her. She also knows that celibacy is the best way to stay safe.

Enter Miles Austin- intelligent, funny and way too sexy for Simone to resist.

But her classmates don't know that she's HIV-positive - and what is the truth worth in the hands of the wrong person?

The peak of the AIDS epidemic was in 1987, I was 15.  I remember that HIV and AIDS held the biggest fear as far as STDs went.  There was the terrifying Grim Reaper advertisement that aired on televisions all across the country, putting the fear of god into everyone

Now in 2019, it's not something I really think about.  I know now that HIV is not a death sentence, and that HIV rates across Australia are declining....but not in all parts of Australia.. I have just learned  that Australia's worst HIV epidemic since the AIDS crisis is happening right now, in 2019 in the Northern Territory, so maybe this is the perfect time for a YA novel about HIV to be released.

Simone is HIV positive, she has had the virus from birth, contracted from her mother.  Simone was adopted by her two Dads and she has always known what it means to be HIV Positive, and knows how to look after herself.  She also know that she's not supposed to tell people about it, because most people just won't understand.  In fact Simone has recently started new school due the fallout that occurred at her previous school when she told people she thought she trusted.

I seem to be reading a lot of YA at the moment where a character is different in some way, burn victims, amputees, ....
Each of these characters have overcome their obstacle in different ways, but there are some seemingly universal factors that helped them along the way.
One, having good friends. Having the right people around you can make all of the difference.
Two, accepting what your (new) life is like and making the most of it.

With or without a disability/medical condition/disfigurement High School can be hard, and one of he most important things you can do is 'Find Your Tribe'.  Find the people who make you feel good about yourself, make you laugh, and make you want to be the best version of yourself.  That sounds like whole lot of 'inspirational quote' mumbo jumbo when I write it down, but honestly, I don't think I did that in High School.  I spent way too much time trying to be like other people and worrying what other people thought of me...maybe there's no way of getting away with that, but don't make it a full time thing.

Posted by Rebecca at 9:23 AM No comments: