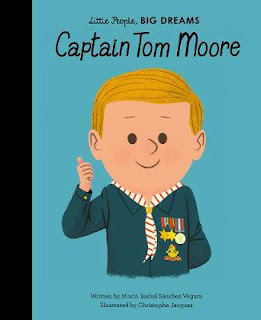 Once there was a humble boy from Yorkshire called Tom, who was born with his feet firmly on the ground. His determination and courage saw him and his comrades through the worst crisis the world had ever known: World War Two. So when a new crisis struck in 2020, just before his 100th birthday, Captain Tom knew just what to do. Aiming to raise £1,000 for the NHS by walking 100 laps of his garden, his story soon became known all over the world, with people donating so much that he quickly raised over £30 million! Captain Tom's story shows us that, by coming together, we can dream bigger than ever, and that when the going gets tough, you just have to keep on walking. This inspiring book features stylish and quirky illustrations and extra facts at the back, including a biographical timeline with historical photos and a detailed profile of the Captain's life.

Quite the quick turnaround on the publishing of this one! Books can take years to get published.  This one was written, illustrated, published and in stores within 7 months.  An extraordinary achievement, and the story of an extraordinary man.

On 6 April 2020, aged 99, Captain Sir Tom Moore initially set out to raise £1000 for NHS charities, as his way of saying Thank You to all of the care workers who looked after him during his recent stay in hospital. He was going to do this by walking laps of his garden, 100, 25metre laps by his birthday on April 30th.  He actually ended up raising £32,794,701

I love the fact this has been published as part of the Little People, Big Dreams series. A series that has told the story of so many globally well-known people, David Attenborough, Mother Teresa and Elton John, as well as some lesser known, such as Louise Bourgeois or Zaha Hadid.  It’s a highly accessible series for young readers, and introduces even the youngest readers to interesting people in all fields.  I have had a customer flicking through the books, commenting that she didn’t know many of the names…I don’t see that as a problem, think that’s exactly the point.  Readers, even parents/teachers, are able to broaden their knowledge of remarkable people in a fun and accessible way.

This man, Captain Tom Moore, did an amazing thing, during a time when the world was in crisis.  His achievement is current and because of that it will be a popular choice, and hopefully by finding this book, readers will look to the series for the other titles.