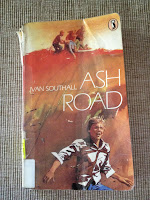 It's hot, dry and sweaty on Ash Road, where Graham, Harry and Wallace are getting their first taste of independence, camping, just the three of them. When they accidentally light a bushfire no one would have guessed how far it would go. All along Ash Road fathers go off to fight the fires and mothers help in the first aid centres. The children of Prescott are left alone, presumed safe, until it's the fire itself that reaches them. These children are forced to face a major crisis with only each other and the two old men left in their care. The best selling Ash Road is an action-packed adventure story, so evocative of rural Australia you can taste the Eucalyptus.

This was the one book I was most looking forward to re-visiting for AusReading Month.  I can't remember when I first read it, Uni probably, but it's always been there in the back of my mind as a book I loved.  20+ years on, it wasn't quite what I remembered, less action, but more suspenseful story with a real growing sense of dread as the story reaches its climax.

There was an unexpected treat I got from reading this book, and it may seem a bit weird, but for me it was like I was sitting in the kitchen with my Nan.  It's because of the language used in the book, they way people spoke, and the turns of phrase used that you just don't hear so much these days.  People had rows not fights, said Crumbs! not #$%^, boys were fellows and it was normal to be threatened with a 'jolly good smack' (my Nan never actually said that!).  Along with this everyday voice, there is a rich descriptive language which really does bring the terror of the bush fire alive.

I read something once that talked about a common thread that runs through all adventure /mystery type stories for children, and that is the lack of parents/adults.  Think about the Famous Five, Narnia Chronicles, Tomorrow, When the War Began...get rid of the parents, and the children are forced to deal with the drama on their own, the same goes for Ash Road.  In fact as I was reading this book, I did have my doubts as to whether parents would actually leave their children with the threat of a bushfire looming, but maybe that has something to do with the fact that I had read the book before and I know what was coming.  When I finished I felt that I understood, noone knew the fire would spread as it did, the adults left, thinking their children were safe and went to help those who really did need them.  As I mentioned earlier, this book didn't feel as action packed as I remembered, but the writing creates a real sense of dread and doom as the fire gets closer, and I really started to wonder how they could possible survive it!

This book had been unavailable in Australia for many years (ironic), but has now been recently reprinted, so it will be easy to get your hands on a copy. You can see the edition I read (top left), a 1987 edition, a very well read book by the looks of it, and just what you want from a library book!  So, do I think this book stands up for today's readers?  This is a classic in the true sense, in both the language and the time in which the book is set, so that might put some readers off...but bush fires are still a very real threat in Australia and because of this and the idea that children are left on their own to deal with it, I think there are still plenty of readers who will still love this book.